Last weekend I found myself on a 5 hour coach journey to Stafford for V Festival. After having such an incredible day at T in the Park in July I was so eager to go to another festival before the end of the summer. It was quite an exciting thing considering it would be my first every time camping (yes I know, shocking). Anyway, heres how it went… 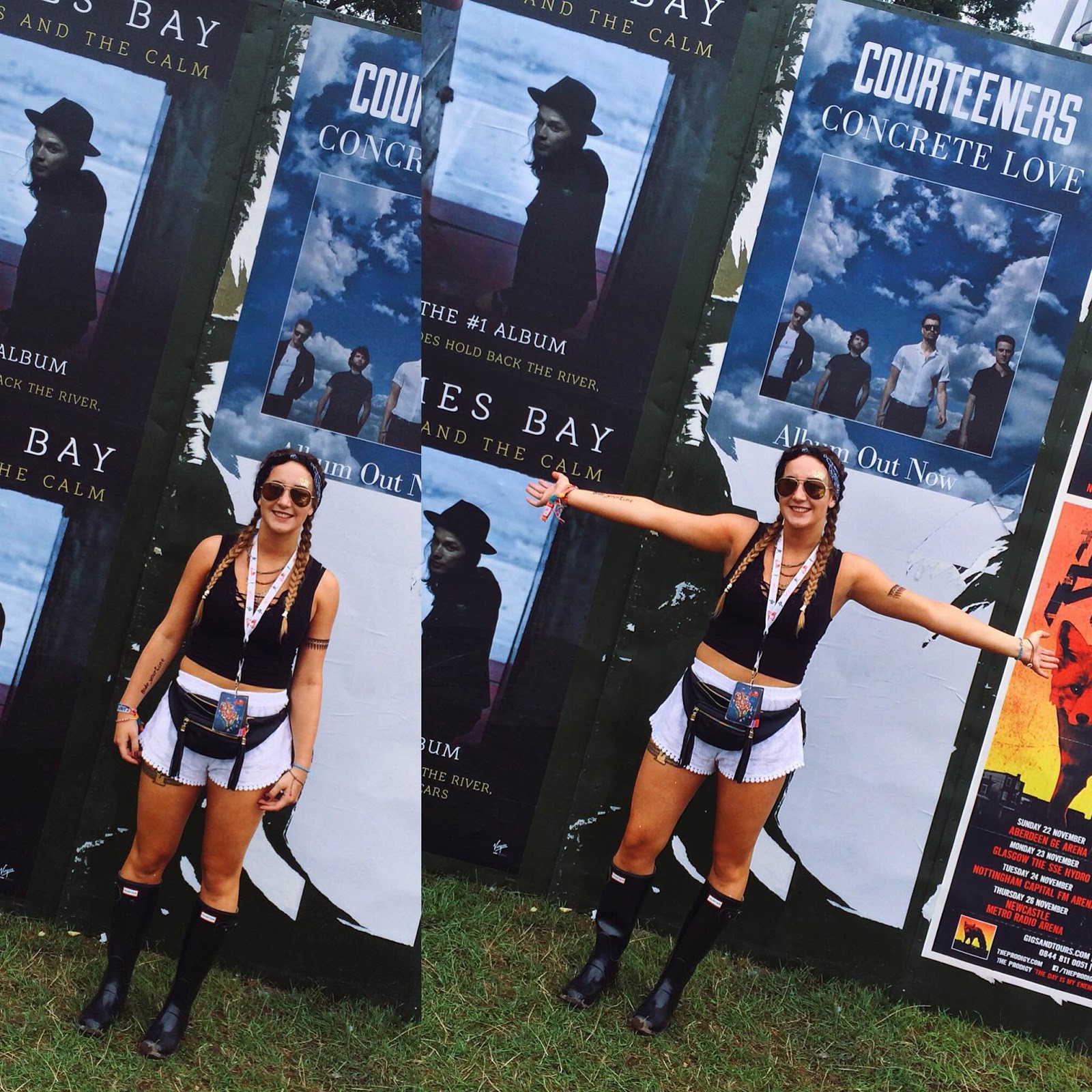 We arrived on the friday afternoon at around 3pm and had enough time to find a spot for the tent and set it up before the V Festival 20th birthday party at 7. I was completely hopeless at putting the tent up and neither of us had a clue so lucky our neighbors helped. We camped for 3 nights and actually managed pretty well, I thought I wouldn’t be able to cope without a shower for that long but it didn’t bother me too much. Lots of baby wipes had to do. 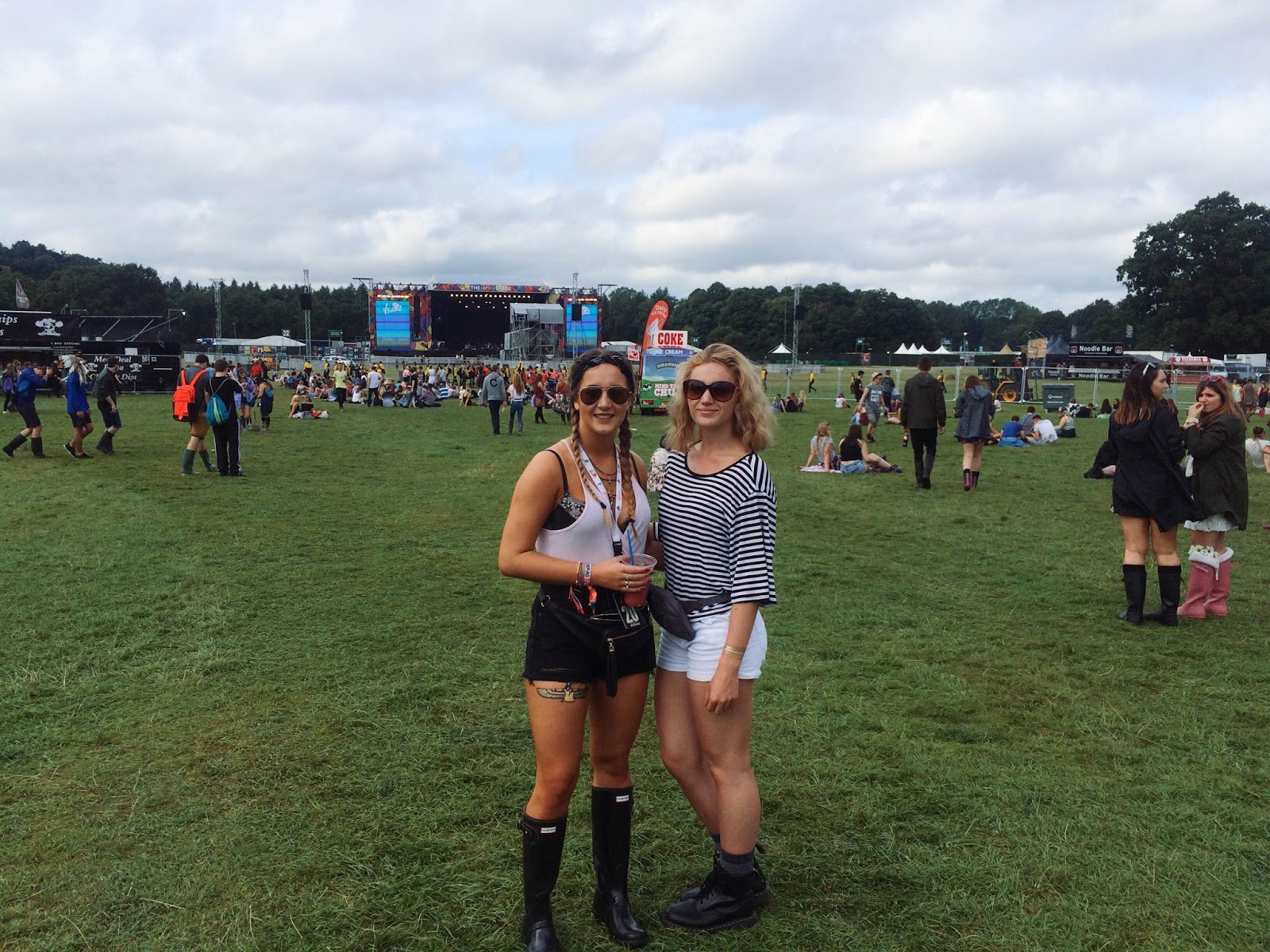 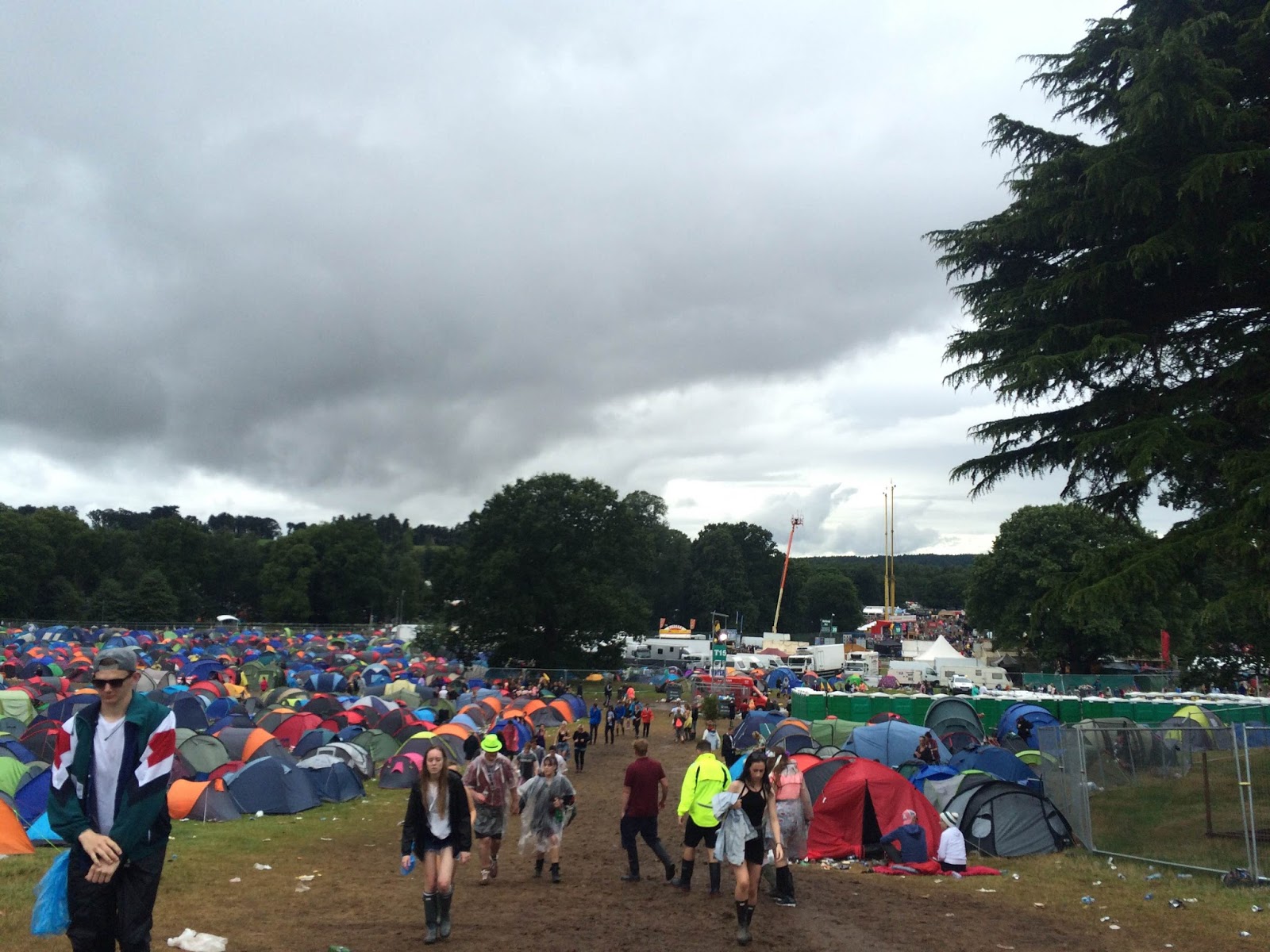 Luckily we managed to get into the closest campsite to the main arena so it was only a 15 minute walk to the tent. 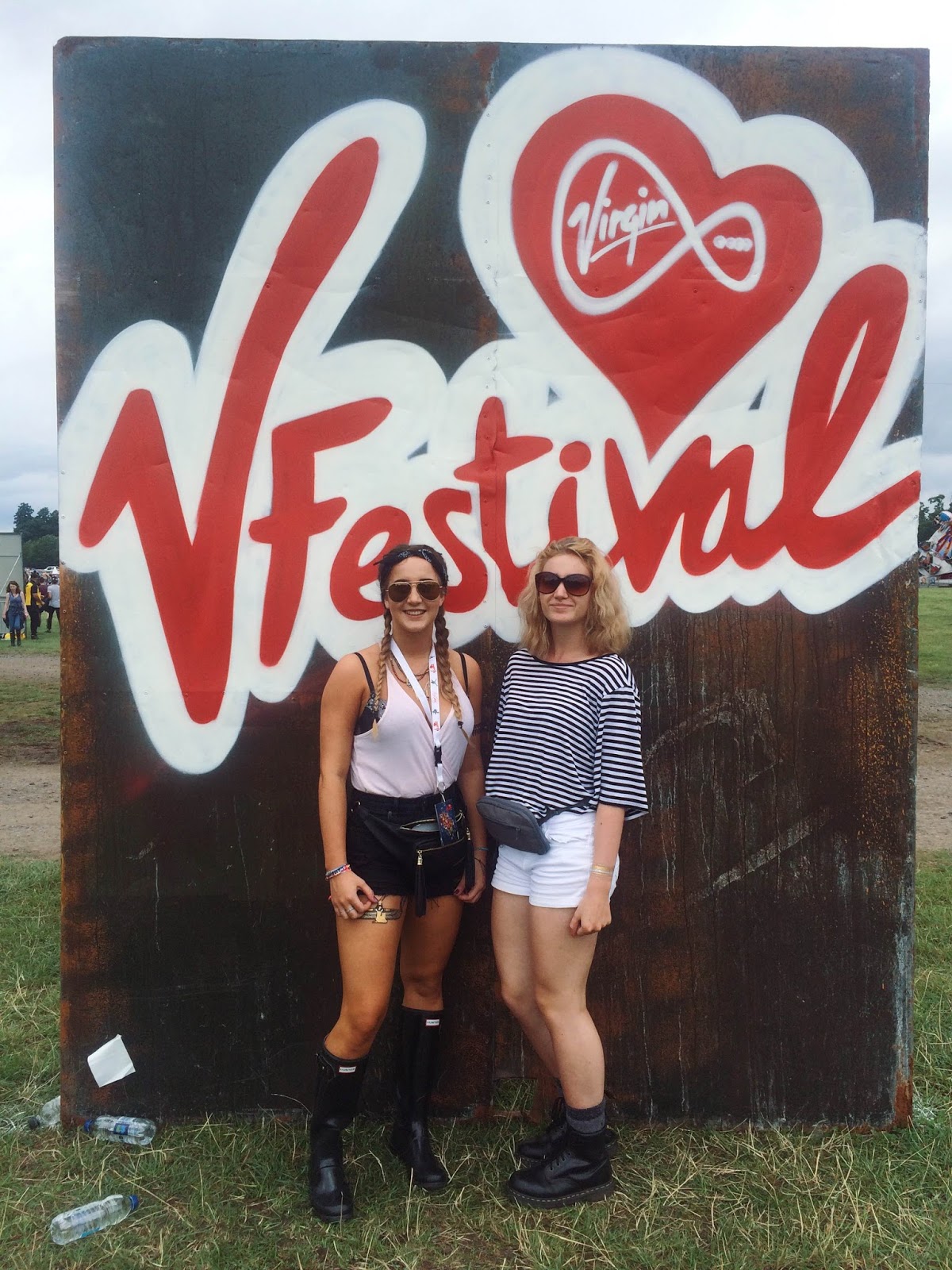 Top – Asos (only now in black)
Shorts – Topshop
Wellies – Hunter
Bumbag – River Island (similar)
This photo was taken on the saturday next to the MTV stage where we saw Scouting For Girls and The Coronas.
I took 7 sets of clothes for 4 days which I thought I was way too much and that I over packed but I ended up changing clothes twice a day as on the saturday it was so hot that I could not cope being in denim shorts and had to go put a floaty dress on. We stood in the sun for a good few hours and managed to get tan lines! Then on the night we were in the dance tent and I can’t even describe how hot and sweaty it was in there. But it was worth it. Then on the sunday I had to yet again change clothes as it poured down while we were watching James Bay so we got soaked through!
As for make up all I ended up wearing was my Chanel Vitalumier Aqua foundation, MAC MSF powder, Benefits Roller lash, ABH Dip Brow and MAC taupe lipstick. I took way more make up than I should have because I even gave up with just wearing what I mentioned above by the sunday. As for skincare I took the Simple cleansing lotion, eye make up remover and wipes which I used so much over the 4 days. I wasn’t too fussed about my body not being totally clean but I had to keep my face clean. I then took the Elizabeth Arden 8 hour cream which was literally my one essential product of the weekend that I would not have gone without. My skin was so soft and I didn’t even gain any spots from the whole 4 days of no showers! 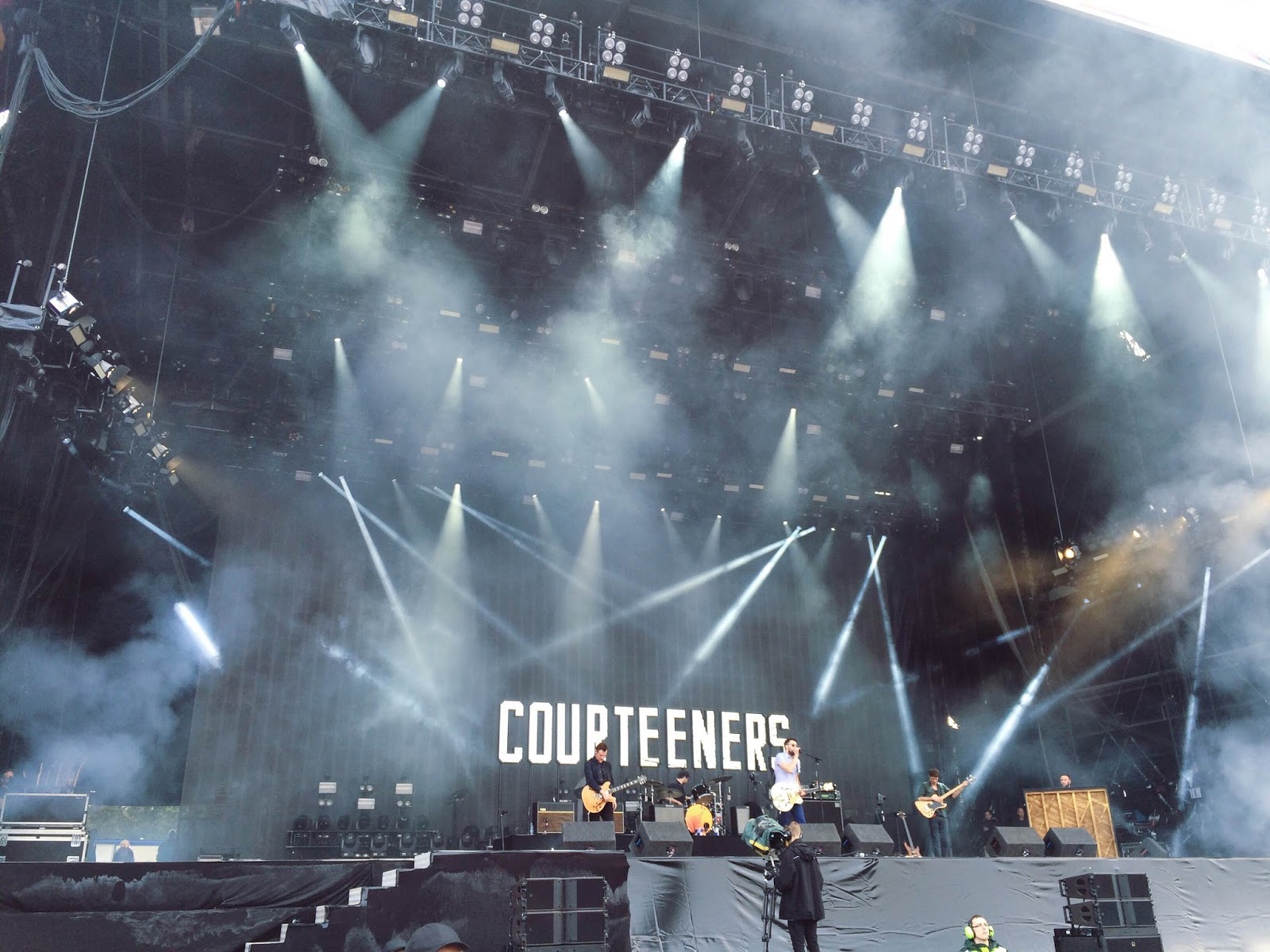 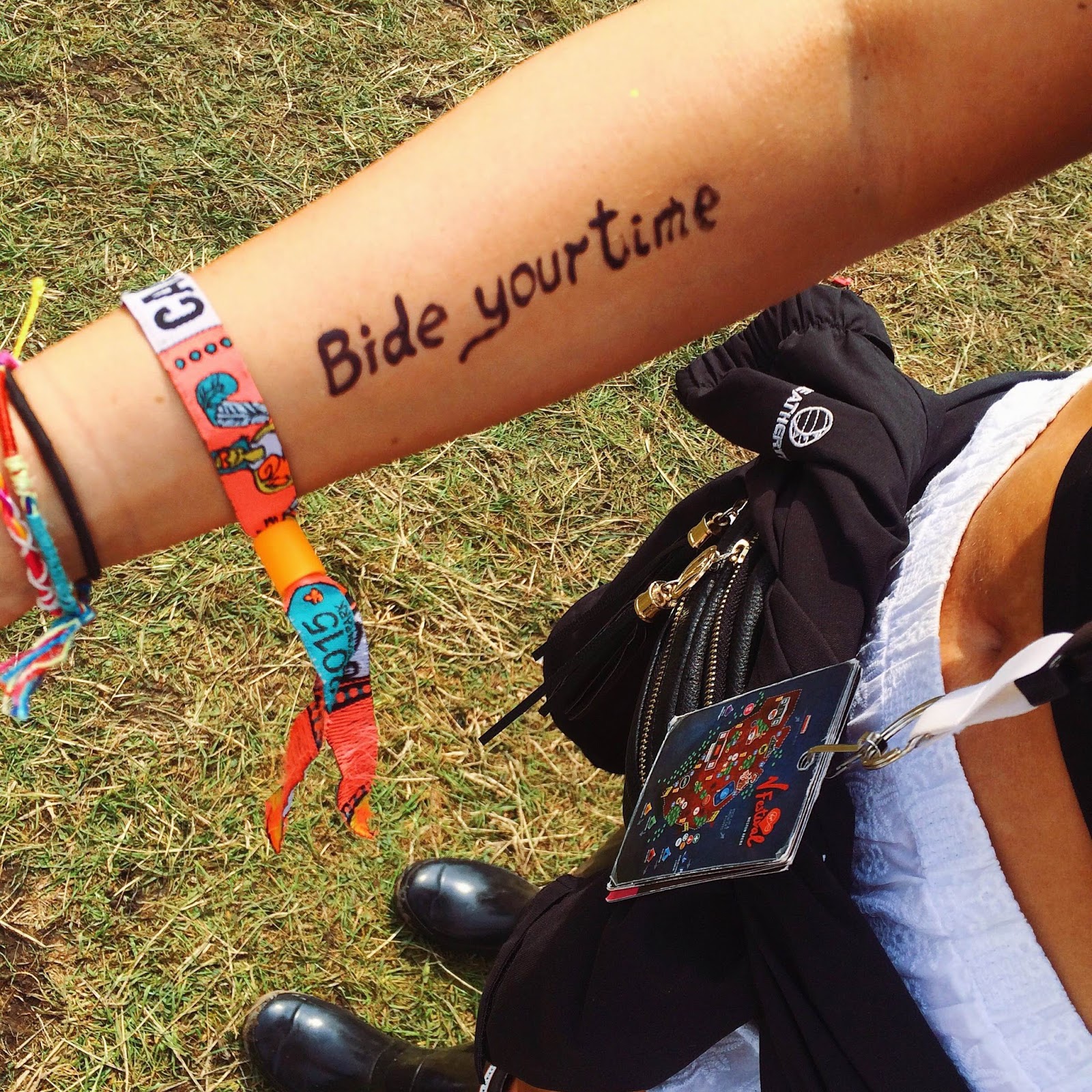 The band I was most looking forward to seeing was definitely the Courteeners so I had to get a tattoo to show it, why not? Unfortunately you were meant to leave them to dry for an hour, but it rained so it is now very smudged and not budging for 2 weeks. But anyway, the Courteeners were so good that I booked tickets to go see them in Newcastle in November the day after I got home! Was definitely worth waiting hours in the rain to get to the barrier. 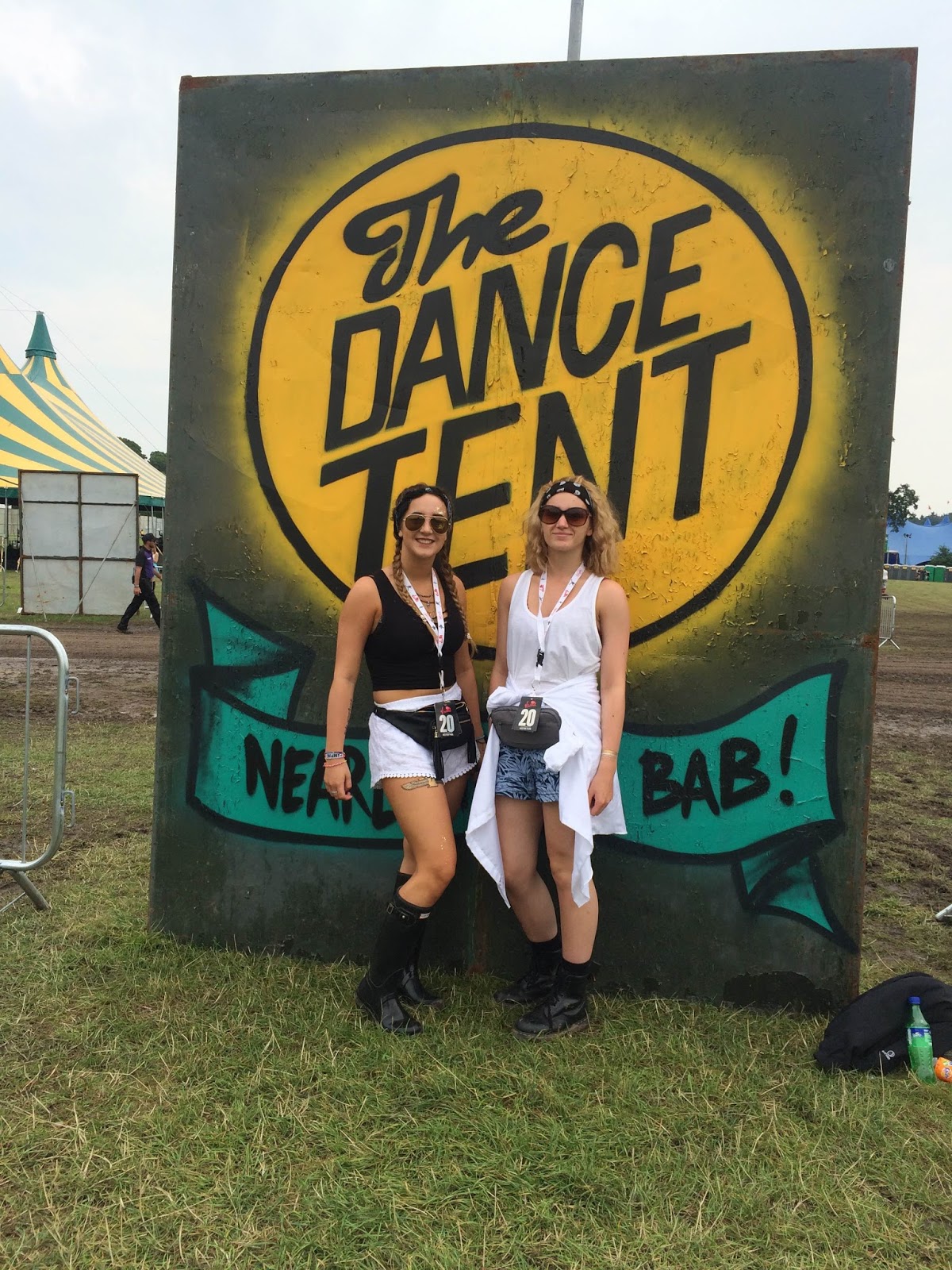 Top – Topshop
Shorts – Topshop (similar)
The dance tent was where Ellie and I spent most of our Saturday. How we managed to spend hours straight in the Sure Arena tent and the Dance tent I will never know. We saw Duke Dumont, Philip George, Toddla T and Oliver Heldens. I really enjoyed all the DJ sets in the tents and I’m really pleased we picked Oliver Heldens over Calvin Harris as it was one of my favourite sets of the weekend. I also heard a lot of people say that Calvin Harris wasn’t that great? You will have to let me know if you went. 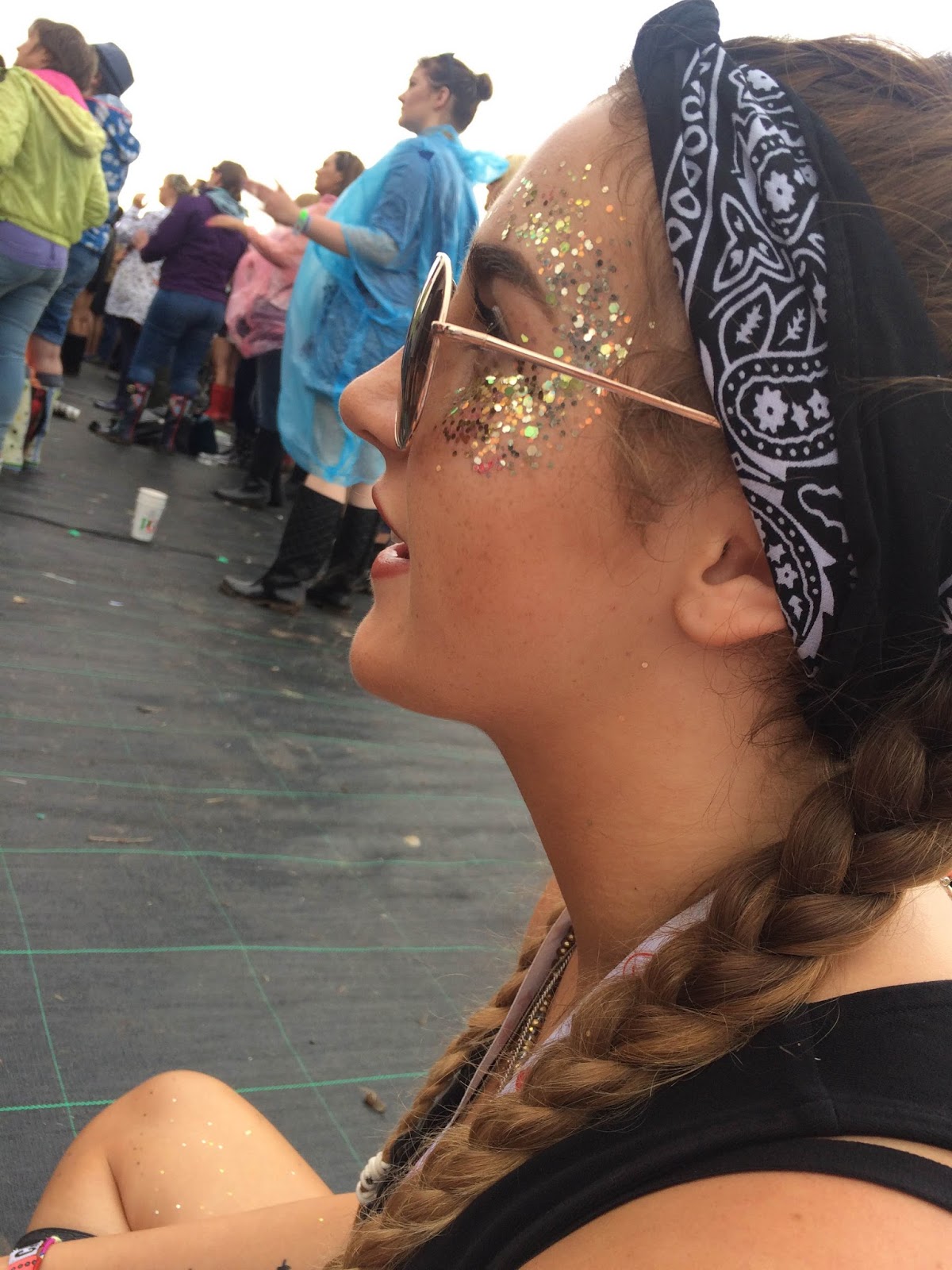 I was loving this face glitter from Topshop all weekend. I wish I could wear it more often, it is so pretty! Really easy to apply with the face glue which it also from Topshop. What better way to disguise dark under eye circles hey? Of which mine were terrible this weekend as I some how survived on about 8 hours sleep over 4 days. The glitter managed to stay on for over 24 hours, in fact I struggled to get it off in the shower when I got home. I got a few funny looks in the service station in the queue for a Mcdonalds on Monday. 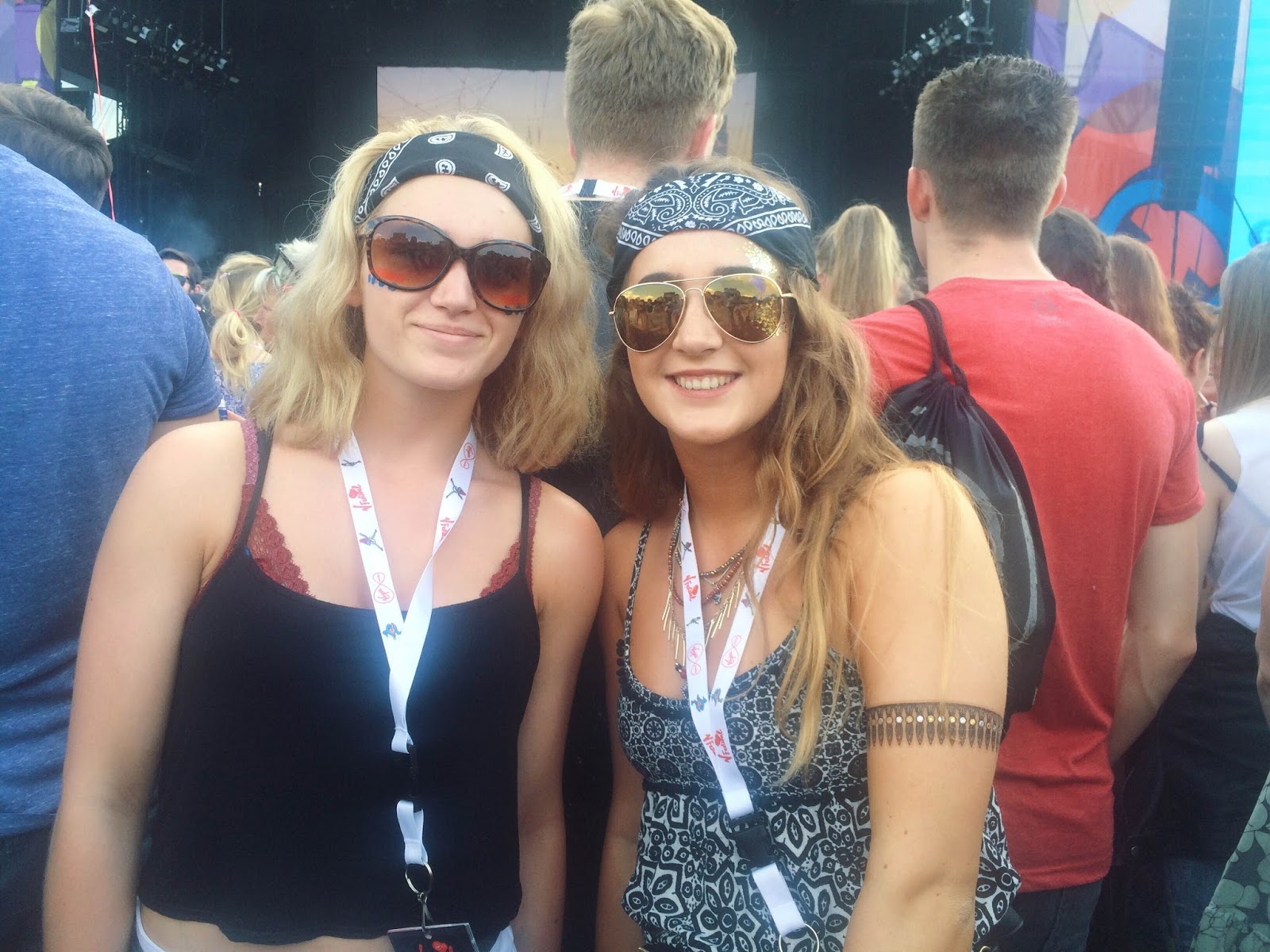 Ellie and I on Saturday waiting for George Ezra on the main stage, he was amazing even though I only knew about 5 songs.
The arm tattoo is from Topshop and comes in a pack for £6.50, considering they were charging £10 for 1 of the exact same ones at the festival! 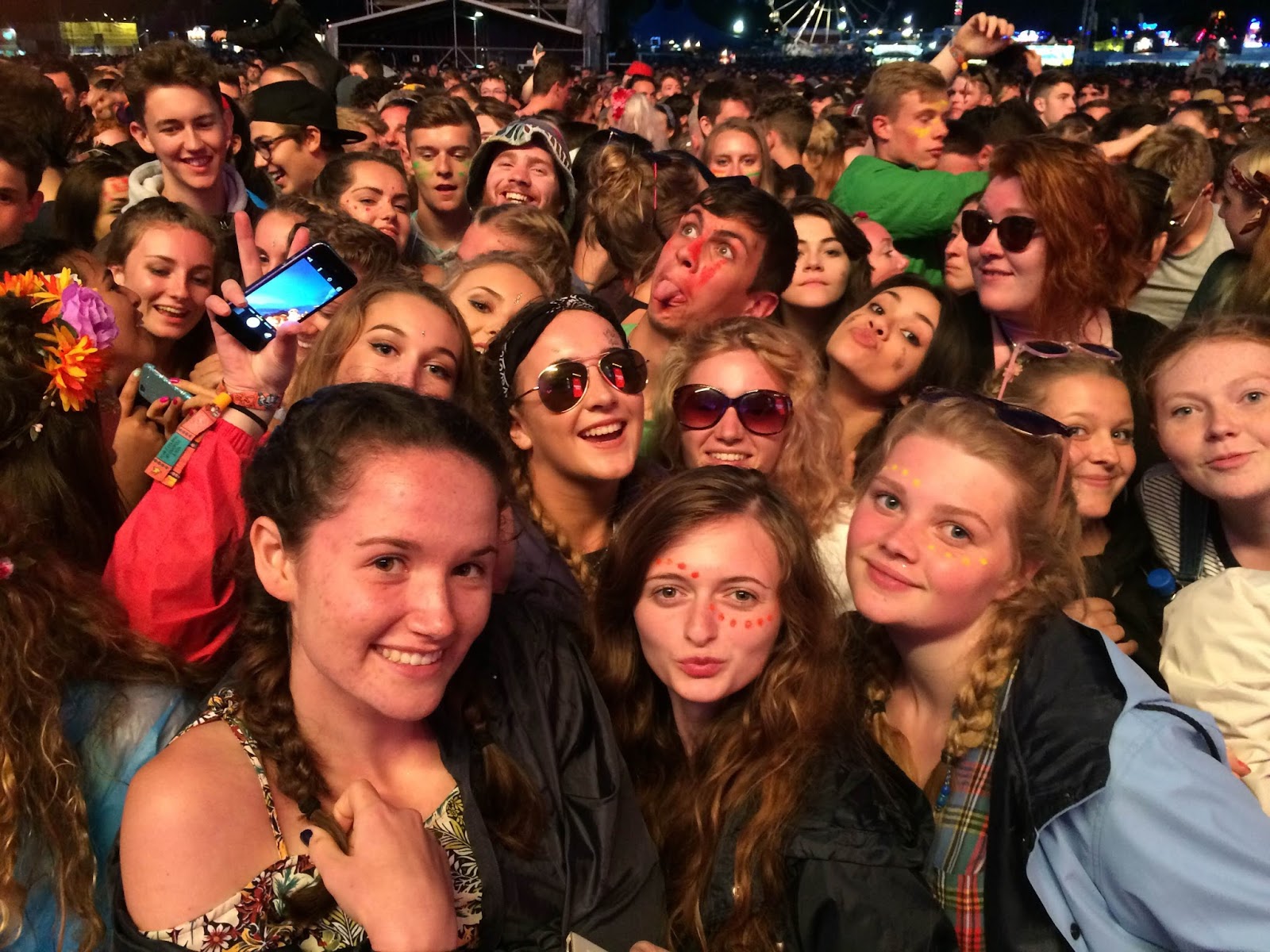 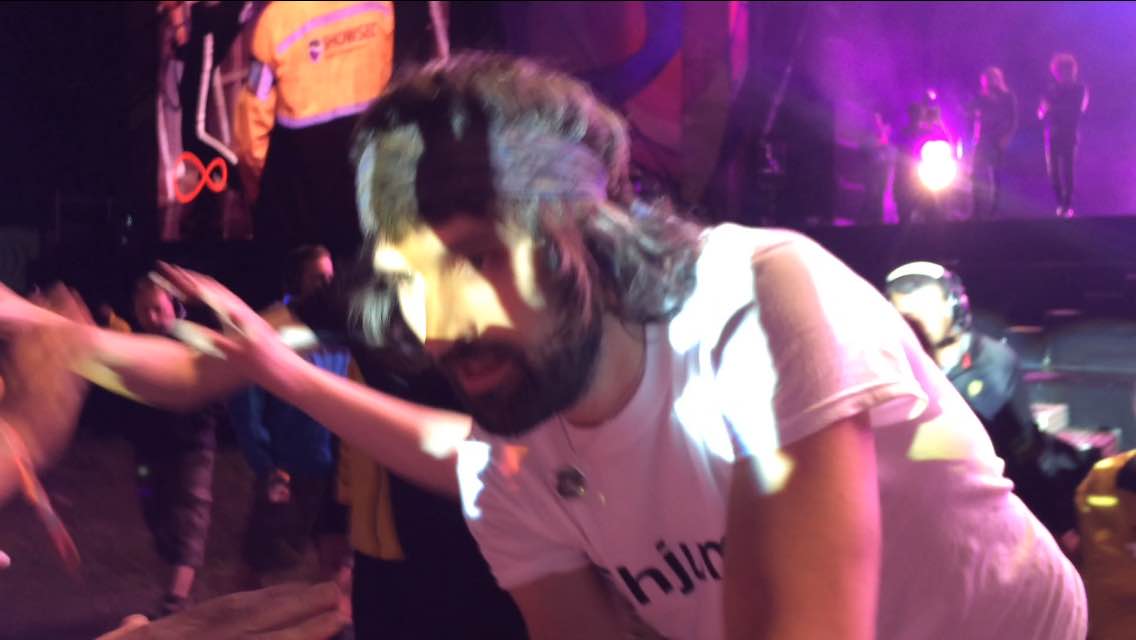 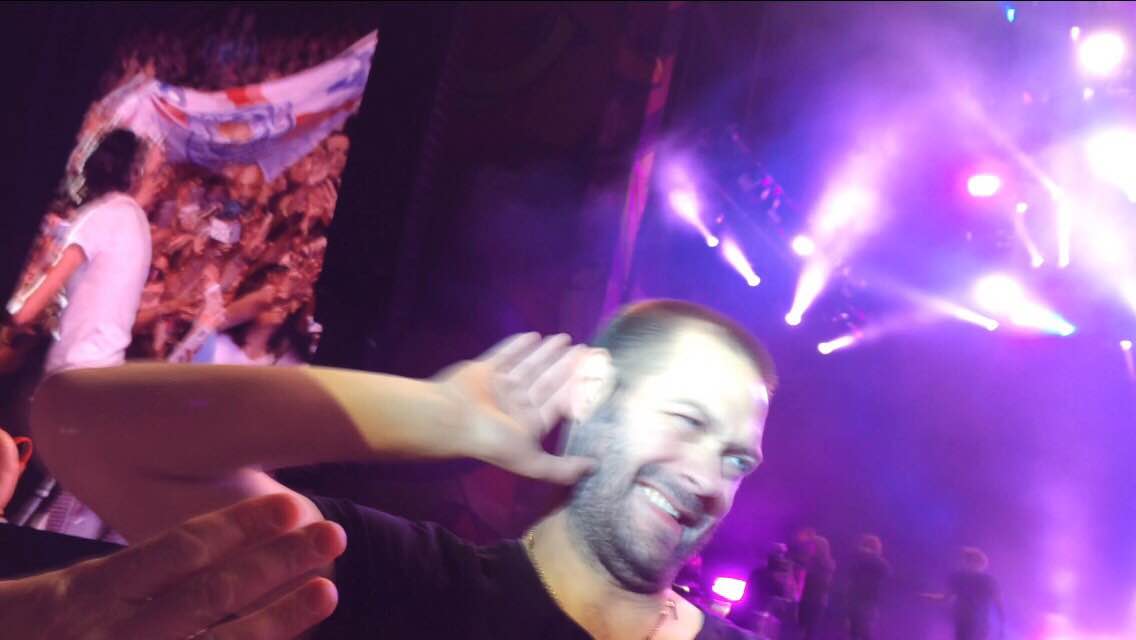 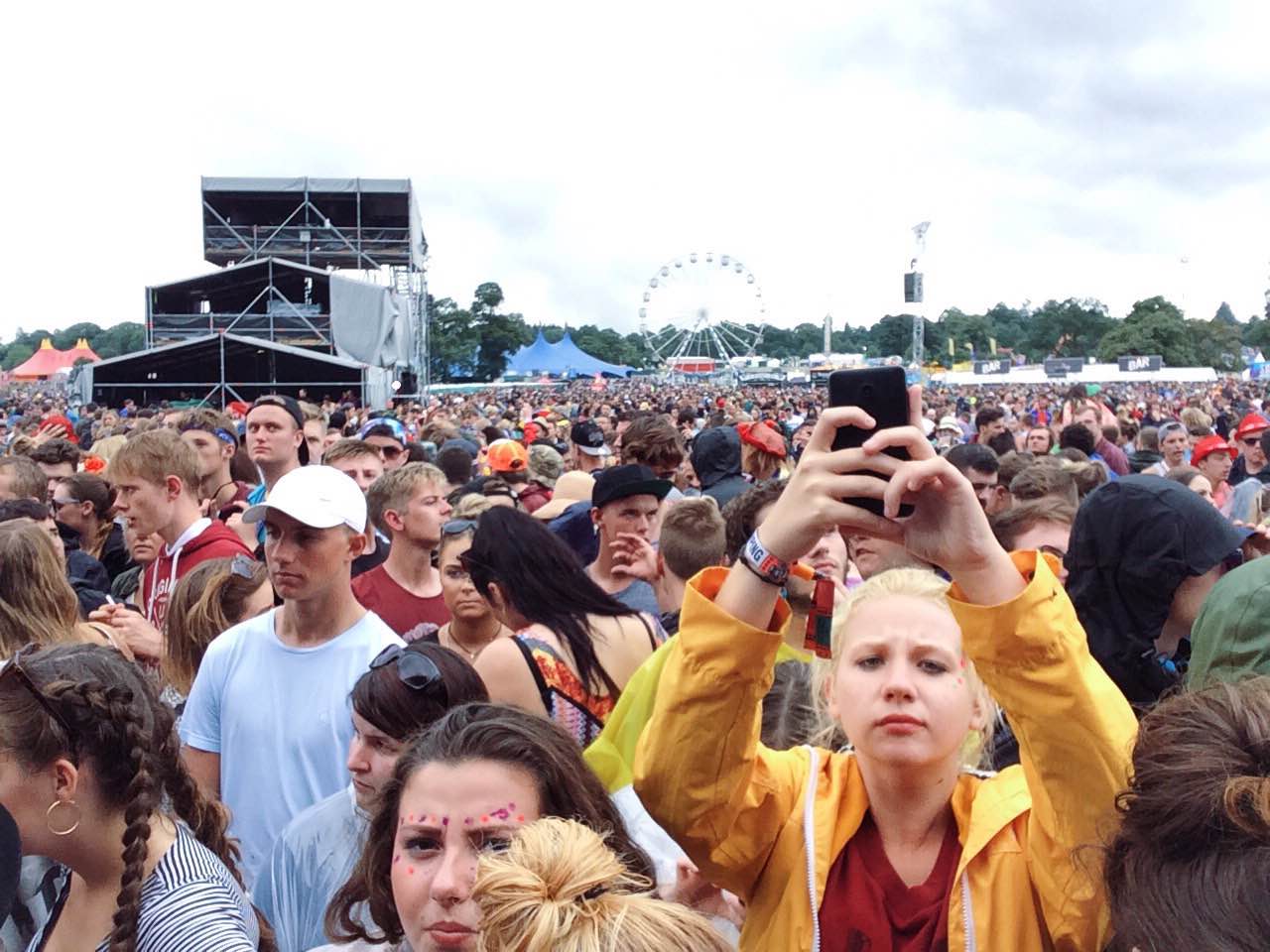 On Sunday night we managed to get to the barrier of the main stage for Kasabian! They were insane and definitely my favourite part of the weekend. However it was quite scary being at the barrier and getting squashed while watching about 6 people get dragged out over the barrier as they got crushed. The crowd was just so mental!
The only major downsides to V was the price of the food. It is obvious that food and drink is always expensive at festivals so we took enough food to last us for the first 2 days as we didn’t see the point in being ripped off. I thought the food was expensive at T but it was even more at V! You would not catch me paying £10+ for a box of noodles or £7+ for a burger. We got a pizza on the saturday which was £9 for pizza, chips and a drink we were so hungry and compared to all the other food places that was cheap. Anyway I was really excited for this pizza but it was so disgusting I couldn’t finish it and it made me feel a bit ill for the rest of the day. So yeah I will not be eating pizza at a festival again. However there was a food section called V Healthy which had foods such as burritos, BBQ, sandwhiches and fruit which is where we ate once and it was really nice; loads better than the arena food but still expensive! So me and Ellie mostly lived off cereal bars, digestive biscuits, cheese strings and strongbow for 4 days and it was fabulous. 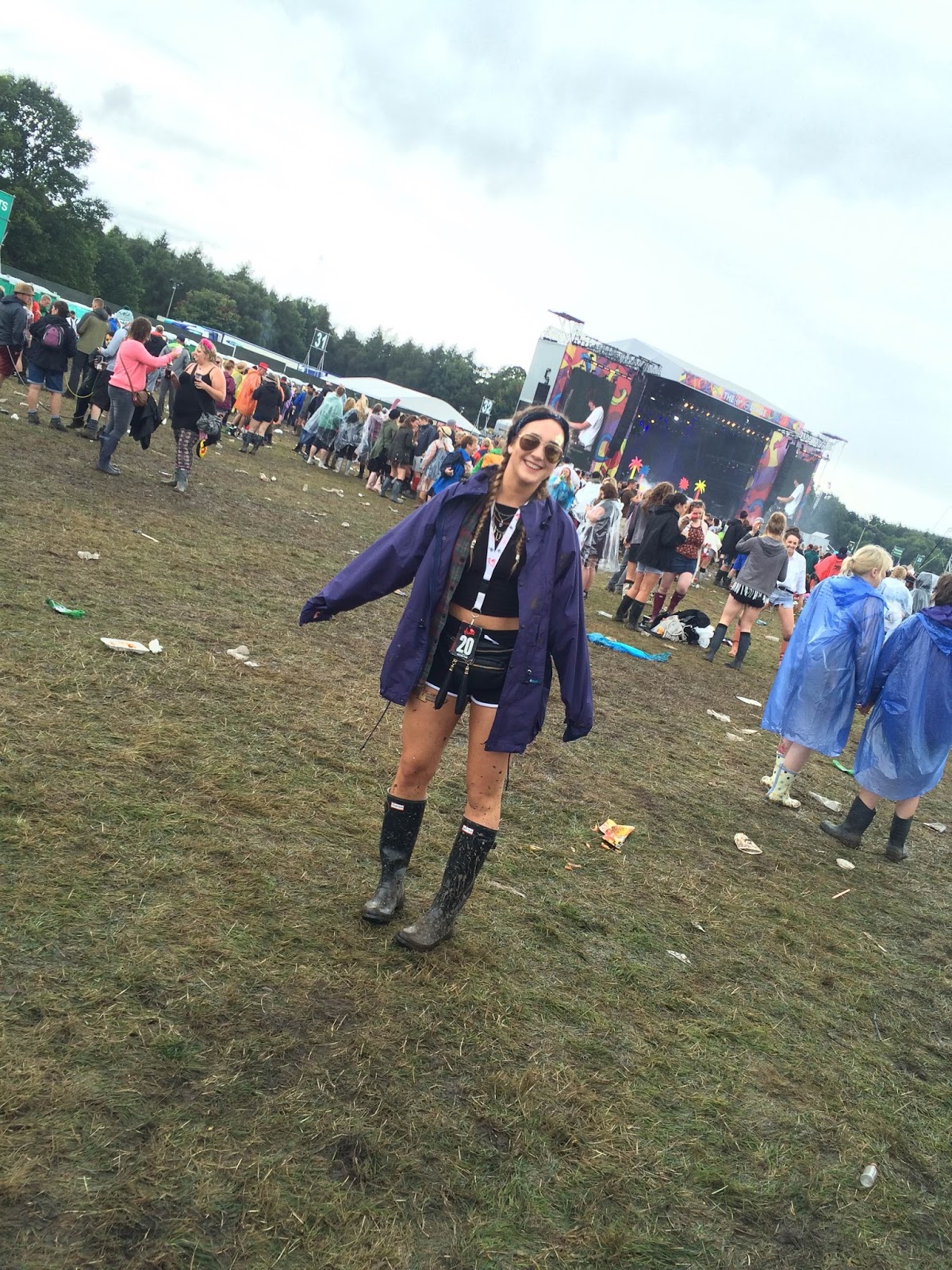 So V Festival Weston Park was absolutely insane and a great experience, writing this post and looking back at all the photos is making me seriously sad! I can’t wait to go to more festivals next summer and V will without a doubt be on the list.
I have made a pinterest board of everything I took to V that I can still find on the internet! Click here to view
Until next year V…
Thank you for reading
Georgia May x
Categories: lifestyle, V FestivalBy georgiamayAugust 27, 2015Leave a comment